+ The Consumer Price Index barely rose (.1%) in January even though housing costs, food, and medical care costs are experiencing some upward pressure. – Americans increased their borrowing for the 22nd straight quarter as more households took out loans to buy homes or refinance existing mortgages, according to a report released today from the Federal Reserve Bank of New York. Total U.S. household debt rose by $601 billion in the fourth quarter from a year earlier, or 1.4%, surpassing $14 trillion for the first time, the New York Fed’s quarterly household credit and debt report showed. That’s $1.5 trillion above the previous peak in the third quarter of 2008. Overall household debt is now 26.8% above the second-quarter 2013 trough. Mortgage borrowing rose by $120 billion to $9.56 trillion. The rate for a 30-year mortgage has fallen by about 100 basis points over the past year, adding to home purchasers’ buying power. For example, a $500,000, 30-year loan costs about $300 less per month. “Mortgage originations, including refinances, increased significantly in the final quarter of 2019,” Wilbert Van Der Klaauw, vice president at the New York Fed, said in a statement. Mortgage loans for young adults age 18 to 29 rose to a the highest level since the third quarter of 2007. Originations for 30-year-olds rose to $210.1 billion last quarter — the highest level since the end of 2005. Total debt for people ages 18 to 29 rose to a record $1.04 trillion. Student debt increased to $1.51 trillion from $1.46 trillion at the end of 2018. More than $100 billion in student debt is held by those age 60 and over. Auto loans rose to $1.33 trillion, while credit card debt rose to a record $930 billion. Auto debt, which has risen for 35 consecutive quarters, increased $16 billion from the previous quarter. Almost 5% of auto loans are 90 days of more delinquent. This is the highest percentage since the third quarter of 2011. Credit card delinquencies rose to 8.36% an 18-month high. 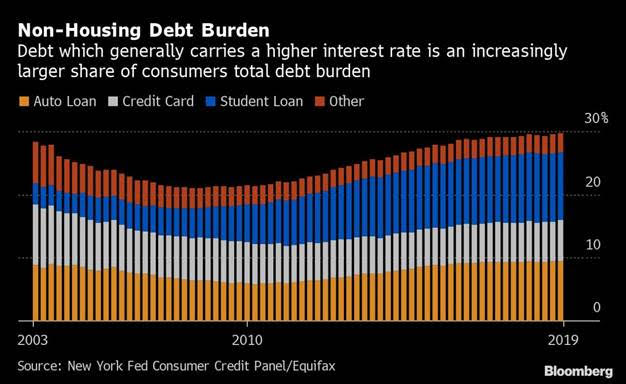 + This story is around a year old, but worth telling. China opened the door to imports of rice from the United States for the first time ever last year. China is the world’s largest rice grower and consumer, producing 148.5 million tons of the grain in 2019 and importing 3.5 million tons. The United States produced 7.1 million tons of rice in 2019 and exported less than 3 million tons. This shows the importance of trade with the USA. They know the big money is in the USA and we will decide where and when they get to join in. That was not the case a few years ago. + Gasoline prices are coming down nicely. Refineries are operating at 88% of capacity. Crude oil prices are down to $50 per barrel. If it goes any lower it will begin to affect oil production from fracking which is a high cost process. 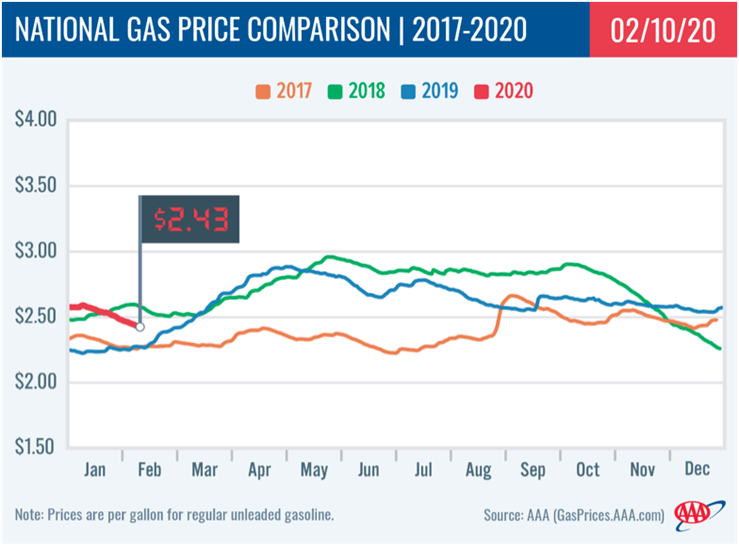 + Freight rates are coming down. 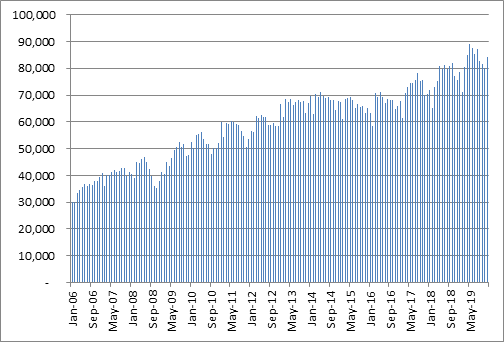 + Fiat Chrysler Automobiles NV earned bragging rights among Detroit auto makers as its North American profit margin outpaced that of its rivals for the fourth quarter and all of 2019. The company’s booming North American business offset weakness in other markets to boost Fiat Chrysler’s fourth-quarter earnings at a time when the industry faces a tough year for new-vehicle sales. The Italian-American auto maker has consistently booked brisk sales of high-margin Ram trucks and Jeep sport-utility vehicles in North America, making that segment its cash cow ever since Fiat took over bankrupt Chrysler. That multistep takeover concluded in 2014, and now Fiat Chrysler is in the process of merging with Peugeot maker PSA Group with the deal slated to wind up by early 2021. Fiat Chrysler’s North American operating profit margin, a closely watched metric, was 10% in the fourth quarter, off slightly from the third quarter but a big improvement from the first half of the year. The late Sergio Marchionne, who as chief executive engineered Fiat’s takeover of Chrysler, had set 10% as his ongoing target for North America. For all of 2019, Fiat Chrysler booked a 9.1% profit margin in North America, topping General Motors Co.’s 7.7% and Ford Motor Co.’s 6.7%. GM had a 9.5% profit margin through the first nine months of the year before a 40-day strike took its toll. The Ram brand registered a 10th straight annual sales gain in the U.S., with an 18% rise moving it past Chevy into second place behind Ford. Sales of all other Fiat Chrysler brands declined in the U.S. last year, signifying the challenges the company faces in the run-up to the PSA merger. The U.S. market shows signs of softening, with most industry watchers expecting a drop in new-vehicle sales this year. Fiat Chrysler is forecasting auto demand in the U.S. will drop 3% on the year, finance chief Richard Palmer told analysts on a call Thursday. In 2019, the industry topped 17 million in sales for a fifth year in a row. The company is also expecting a 3% decline industrywide for the European Union, flat sales in China and a 5% rise in Brazil. “These forecasts assume there is no prolonged impact from the coronavirus issue on demand or on the global supply chain’s ability to avoid any disruptions,” Mr. Palmer said. “We are clearly monitoring the evolution of this situation closely.” – For the first time, the U.S. government’s highway safety agency has approved a company’s request to deploy a self-driving vehicle that doesn’t meet federal safety standards that apply to cars and trucks driven by humans. The National Highway Traffic Safety Administration granted temporary approval for Silicon Valley robotics company Nuro to run low-speed autonomous delivery vehicles that were designed so they can’t carry humans. Nuro’s vehicles won’t be required to have side and rear-view mirrors and other safety provisions. Also not on the safety feature list; windshield wipers, steering wheels or brake pedals. The vehicles previously were subject to federal standards for low-speed vehicles that travel under 25 miles per hour. Those didn’t need steering wheels or brake pedals and didn’t have to have human backup drivers. Nuro’s battery-powered vehicles can be monitored and controlled remotely by a human operator, if needed. The approval is the first sign that NHTSA is moving from abstract statements and voluntary standards governing autonomous vehicles to actual regulation, said Bryant Walker Smith, a University of South Carolina law professor who studies vehicle automation. It’s a signal that the agency, which has stated publicly that it doesn’t want to stand in the way of the new technology, is likely to approve more vehicles. “This is the first time that the agency said ‘yes we approve this vehicle that does not meet traditional driver-oriented standards,'” he said. “That’s a big step because it makes it much more concrete, more real for the agency and really for the public.” In December Nuro announced plans to use its low-speed delivery vehicles in partnership with Walmart to deliver groceries to customers in Houston. The service was to start early this year and use the vehicles as well as automated Toyota Prius hybrid cars. 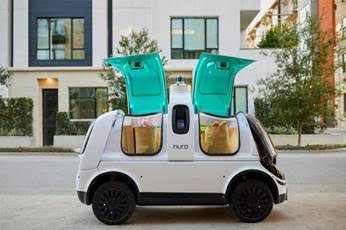 – Joyce Parks was struggling to afford her Kia Soul when, she says, the dealership where she had bought it pitched her an unconventional idea: Stop making the payments. Ms. Parks, 63, says employees told her that she couldn’t trade in the Soul, but that she could buy another car. To get rid of the Soul, the dealership told her, she should have the lender repossess it, Ms. Parks said. The trade-in, where a buyer hands a car back to a dealership and uses it as credit toward another one, is often a crucial step in car buying. But some dealerships are instead telling buyers to give their old cars back to their lenders—and selling them new ones—in a practice known as “kicking the trade.” It is difficult to estimate how often this happens. Auto-sales veterans say the practice is an open secret in some showrooms. Dealerships now make more money arranging financing than selling vehicles. If a car loan goes bad, it typically isn’t the dealership on the hook—it is the borrower or lender. The National Automobile Dealers Association said there is no evidence to suggest “kicking the trade” is prevalent. Dealerships “could not sustain carefully cultivated relationships” with lenders “if they were to engage in the type of behavior alleged,” a spokesman said. Consumer lawyers say they have seen more such cases. Credit-reporting firm TransUnion calculates that nearly 24 million U.S. vehicle loans were originated in 2018. About 300,000 of those vehicles were repossessed within 12 months, up 17% from 2014. Roughly a fifth of people who have had a car repossessed over the last several years take out another auto loan within a year of the repossession, TransUnion says. Dealerships typically don’t make loans. When consumers need financing, a dealership electronically sends their loan applications to banks, credit unions and other lenders. They, in turn, decide whether to fund the loan. Problems often begin with consumers who buy cars they can’t afford or sign loans they don’t understand. But dealerships can compound the trouble. Some dealerships are inflating borrowers’ incomes on loan applications so they can sell them bigger or more expensive cars, according to lawsuits and interviews. When dealerships kick the trade, they typically get a lender to approve a loan for the buyer’s new vehicle. Next, the buyer generally goes home with two vehicles and two loans. It is only then the buyer asks the original lender to repossess the original car. Lenders generally say they will cut ties with dealerships that do this. Often, though, the lenders aren’t aware it is happening. Ms. Parks, a former dietary aide in Gastonia, N.C., said she told dealership employees she couldn’t afford the used Nissan Rogue they wanted her to buy. She said she signed a bank loan for it because she felt out of options. Ms. Parks then told Kia Motors Finance, the lender on her Soul, she wanted to return it. The dealership told her not to mention she had just bought another car, she said. After a few months, Ms. Parks couldn’t make the payments on the Rogue either. It was repossessed too. Ms. Parks now drives a used Nissan Murano her family bought her. Her credit score has plunged. She owes at least $15,000 on the Soul and Rogue, according to her credit report. 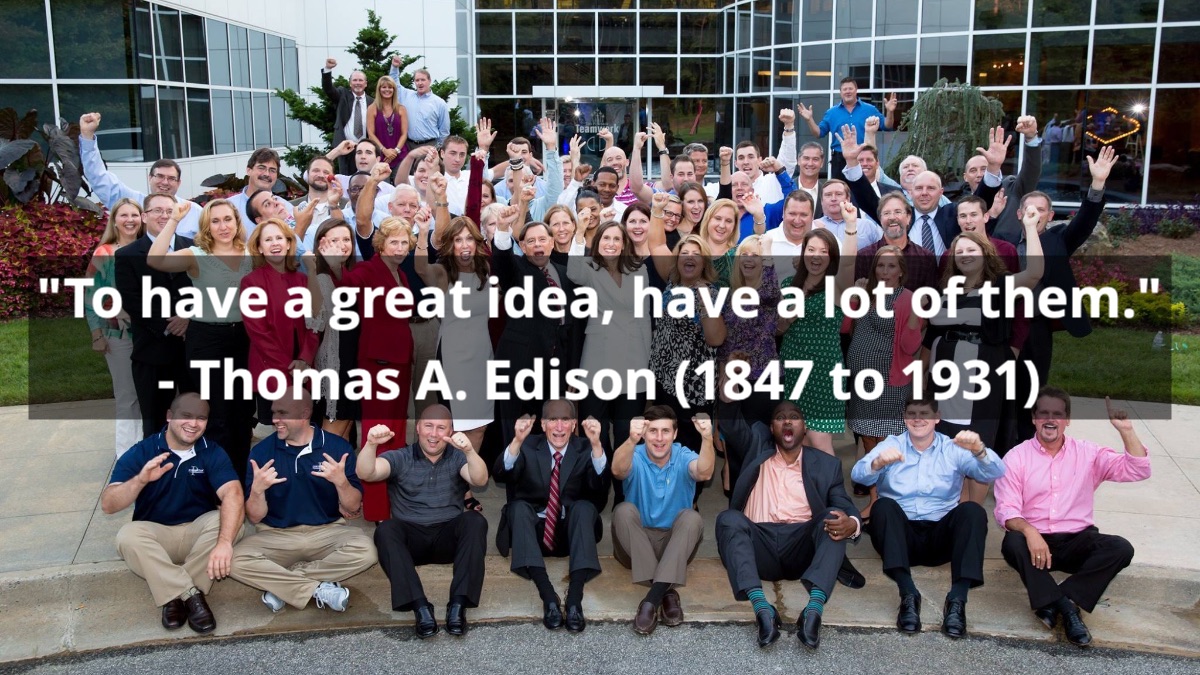